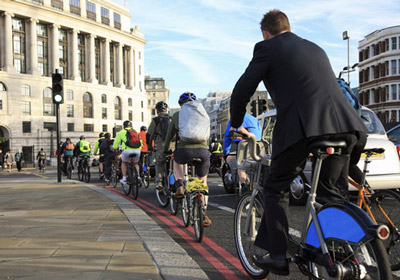 Throughout London there has been a big increase in the number of people commuting with bicycles, in 2016 it was declared that bicycles are the most common form on transport used within London rush hour.

Transport for London have tried to encourage people to continue using bikes for their commute where possible, in 2010 TFL started their own bike hiring scheme, which has been successful in encouraging people to use bikes more often when possible. As well as this they have identified the need for more bike friendly infrastructure around London. TFL conducted research with the findings that 55% of potentially cyclable trips outside of London are being made using other forms of transport, therefore highlighting the need for investment in infrastructure and cycleways to encourage more people to make their commutes with a bike.

The increased number of bikes that we are seeing people using in and around London during rush hour creates more traffic for road users to consider, without the right provisions in place with cycle lanes these vulnerable road users face extra risk. People’s travel habits and opting to use the underground or a bus instead of a bike may be decided by their safety concerns, not wanting to worry about whether they are safe commuting into work.

London is only one part of the United Kingdom using bikes to battle the increasing traffic situation, all over the United Kingdom we are seeing increased levels of traffic and cyclists are seen as part of the solution to this problem. However, in order to encourage as many people as possible to use their bikes the correct environment and safety precautions need to be provided.

As well as identifying the need for greater infrastructure to protect cyclists and make their commutes easier TFL also backed new training courses such as Safe Urban Driving for HGV drivers. The aim of a safe urban driving course is to raise awareness of vulnerable road users and how to prevent incidents occurring. The course includes practical and theory content which cover a wide range of subjects. The practical subject is the main focus of the day as it puts the drivers into the cyclist’s shoes, enabling them to gain a first-hand insight of the issues cyclists face in urban environments.