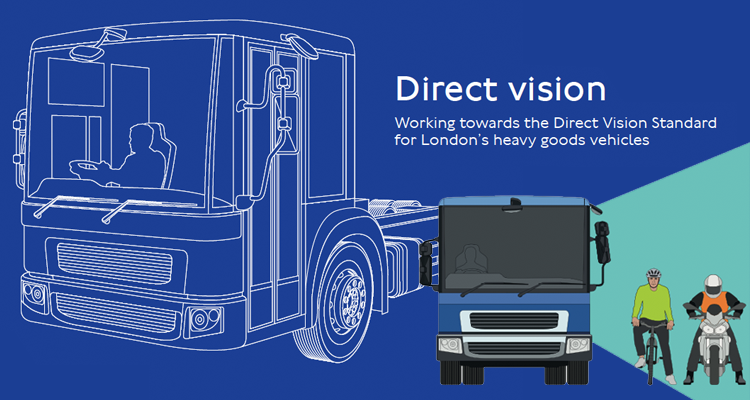 You can now have your say on some of the latest plans that are set to be introduced by Transport for London in an open consultation, similar consultations were launched in both 2017 and 2018 but TFL is now seeking opinions on these proposals and the permit application process. These final proposals expand on the previously mentioned plans to introduce a Direct Vision Standard and safety permit for heavy goods vehicles.

This will include the process of gaining a Direct Vision Standard (DVS) vehicle star rating, the safe system requirements, the permit application and administration process and the enforcement and appeals process.

Over a number of years, we have all become very aware of the Food Hygiene Rating that restaurants, cafes or takeaway businesses have to obtain. This new vehicle scheme would represent a similar initiative for the transport industry whereby vehicles will display their rating.

If fully approved and implemented the new scheme would require all HGVs over 12 tonnes to hold a safety permit in order to either enter or operate within Greater London, the initial applications for this scheme will begin in October 2019. Furthermore, vehicles will be assessed using the DVS rating system whereby they will be given anything from 1 (lowest) to 5 (highest) stars indicating their safety rating.

The full implications of this new scheme would take full force as of October 2020, giving operators one year to upgrade their vehicles or alternatively face not being able to enter Greater London. HGVs that have been given a zero-star rating will be unable to operate unless they can demonstrate other mitigating measures that they take while operating to reduce the risk of an accident occurring.

Furthermore, by 2024 all vehicles that have been rated below 3 starts would be banned from operating within Greater London unless they can demonstrate operating in compliance with an updated safety scheme.

The proposed safe system includes specific danger reducing measures that will help to reduce the likelihood of a vulnerable road user going unnoticed which would include cameras, sensors and visual warnings. However, it is crucial to point out that this like most technology will evolve over time and new equipment may be available by 2024 that becomes imperative.

The consultation surrounding all of these topics officially opened today and will close on Monday the 18th of February. You can have your say by using any of the methods provided below.